The Maddening World of Sheaffer Converters

Sheaffer Converters can make you crazy!

Sheaffer first offered cartridges in the 1960s, and over the years they have introduced a wild variety of different converters. They really wanted people to buy the cartridges, but customers demanded a more cost effective and flexible method of delivering ink to the page.

Modern users will want to start by determining whether the modern piston converter will work in their pen, as that has no rubber parts to go bad over time, before moving on to the squeeze converter. Button converter and accordion style converters are only recommended as a last resort as they are expensive.

We'll try to help you sort out the options.  In the image above, we show most of the converters we have encountered. From top to bottom they are: 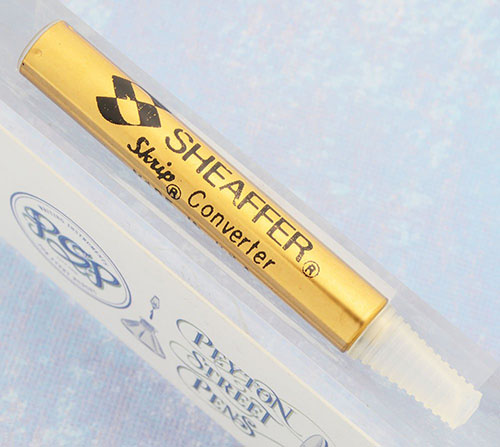 The early cartridge pens had barrels meant to accommodate a cartridge, so the converter for these pens had to work with those dimensions. The metal part of the converter is more or less the same size as a standard Sheaffer cartridge. The tapered "accordion" end allowed the converter to be used in barrels that had "stops" to position the cartridge properly. This converter is needed for some of the Lifetime Cartridges pens, and certain Lady Sheaffer models. They can be hard to find in working condition because of the thin, soft plastic used in the "accordion" end piece.

Operation involves pumping the accordion end-piece a few times, and you can see the ink rise in the clear plastic.

The button converter operates in a fashion similar to button filling pens such as the Parker Duofold. There's a sac inside, and a pressure bar, and pressing the button compresses the sac. These converters can be re-sac'd with some effort. They are just a tad longer than a cartridge, but you do need to be careful because some cartridge pens (such as the Compact Cartridge pens) that appear to accept the button converter can be deceptive -- if the fit is tight the last few turns of section in the barrel can actually compress the button and cause ink to be expelled. 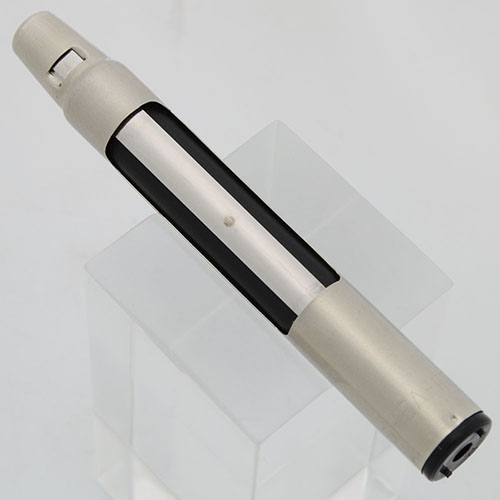 By far the most compatible converter, it shipped with the majority of the Sheaffer models made in the 1970s-90s period. They modified the design slightly in the 1990s, so you will see this converter with opaque blue sacs and red end pieces in 1990s models such as Balance II and Connaisseur. If a pen accepts the modern piston converter, it will accept the squeeze converter. Sheaffer no longer lists this converter in its price lists, but it may be possible to obtain one by contacting Sheaffer.

This is the converter you need for the Nostalgia, Non-Levenger Connaisseurs, and some Lady Sheaffers.

The squeeze converter will also work in the Legacy pens with Touchdown filling systems, and when installed they can be filled via the Touchdown system or by removing the barrel and squeezing the converter.

We have quite a few of these hard to find converters. Ours are new old stock and have never been used.

In the 1980s Sheaffer introduced a few slim fountain pens such as the TRZ, Fashion I, and slim Targa which were too thin to house the full girth squeeze converter. These pens required the slender "Slim II" cartridges and this slim version of the squeeze converter.

The majority of modern Sheaffers will accept this converter, and it also works in the Classic Targa (though you might have to remove a short spring in the end of the barrel if you are converting a rollerball to a fountain pen). We frequently replace the squeeze converter with a piston converter in our new old stock Imperials and the quasi-Imperials such as the 330 and 440, because we do expect these will last longer as they do not have a sac.

Extremely hard to find, these unique converters are required for the Intrigue pens. The notched black piece at the end was engaged by the "piston" knob at the end of the barrel, and turning the knob would move the piston inside the converter up and down just like the piston converter. There's really no other converter that will work in the Intrigue pens, though we have seen Intrigues with their innards ripped out so that a standard squeeze converter could be used.

We're sorry, but we do not have any of these to sell.