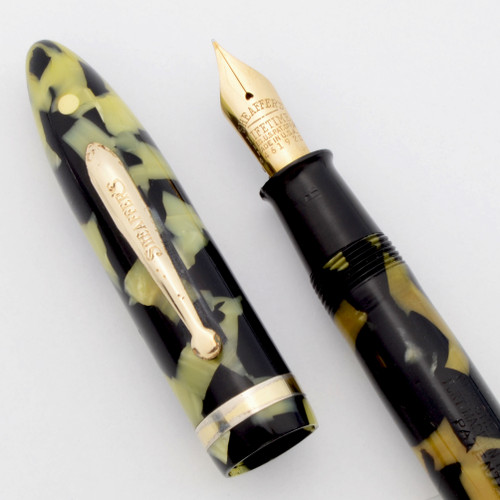 Product Name  Balance Lifetime oversize. One of the largest of the oversize Balances.

Manufacturer and Year  Sheaffer, made in USA -- 1929-30, this pen has the short humped flat end clip.

Filling System  Lever filler. We've restored it with a new sac and it's working perfectly.

Color  Black and pearl with gold plated trim. It's common for the white pearl portion to amber and lose its pearly character, and that has happened on about half of the barrel here. The cap band is 1/8" wide. White dot above the clip.

Nib  Fine gold nib.  It says Sheaffer Lifetime on it, is single tone, and stamped with serial number 4461920.

Condition Very Nice condition. This is a large-sized pen in a classic design and color scheme. The only true flaw is that the cap has a crack in the lip, which extends just underneath the cap band, but doesn't continue beyond the band. The section has some tool marks. Some of the "pearls" on the barrel have mellowed to a caramel color, but overall it's better than average for a black and pearl pen. The barrel has marks caused by the cap lip as well as light scratching. The lever has brassing on both ends. There are hairline cracks in the lighter colored portions of the celluloid, typical of this era of Sheaffer and this particular color, on both cap and barrel. The cap has light to moderate scratching.  The cap band has brassing on both edges. The clip has some plating flaking on the sides, brassing at the very top and light brassing on the flat end. The white dot is a creamy color. The imprints are clear.

NOTE: in the first picture, just below, it appears as though there are marks on either side of the clip. These are simply reflections, and not present on the pen. 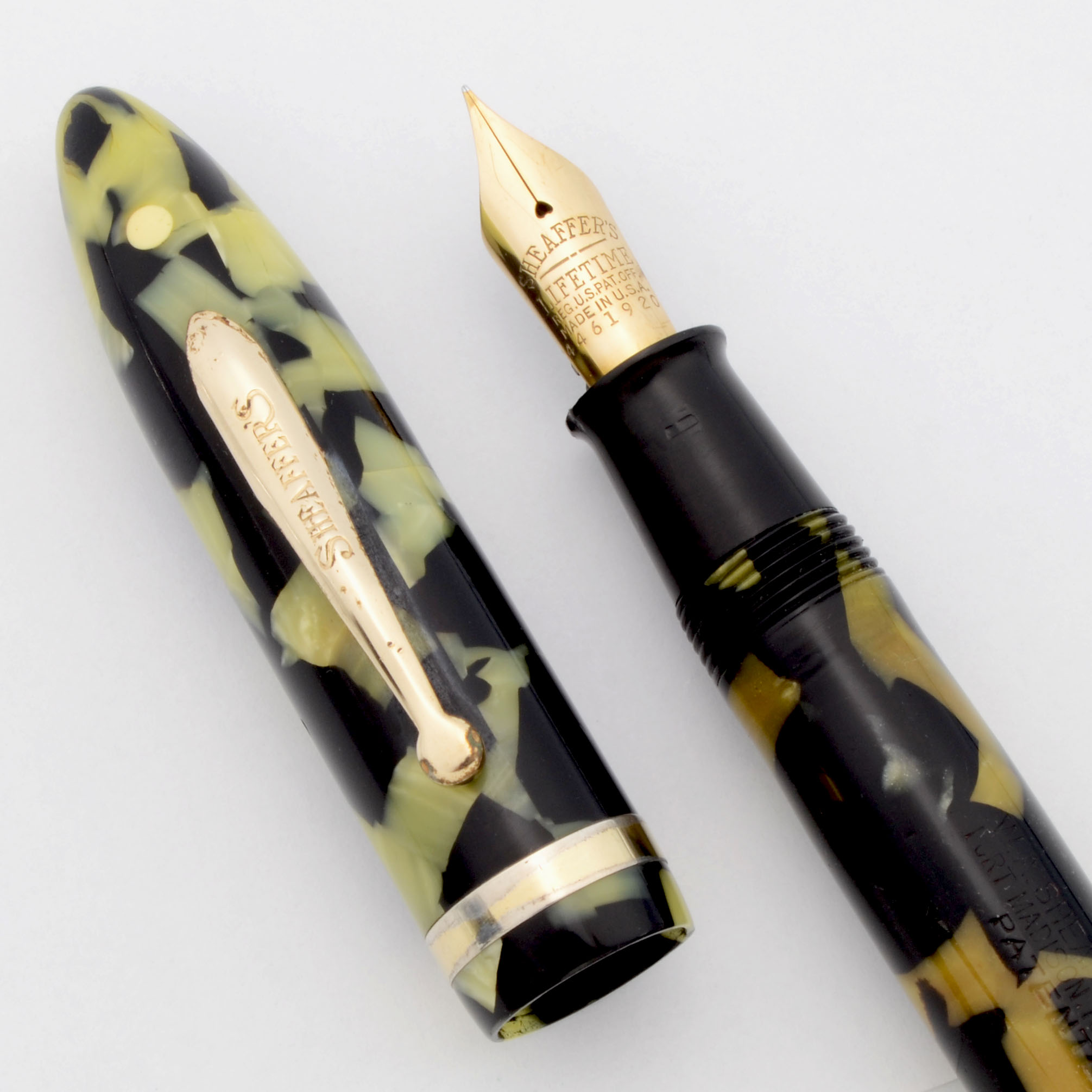 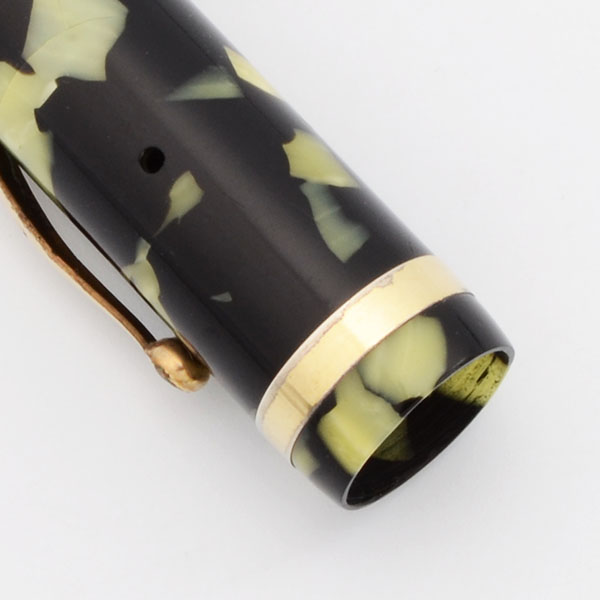 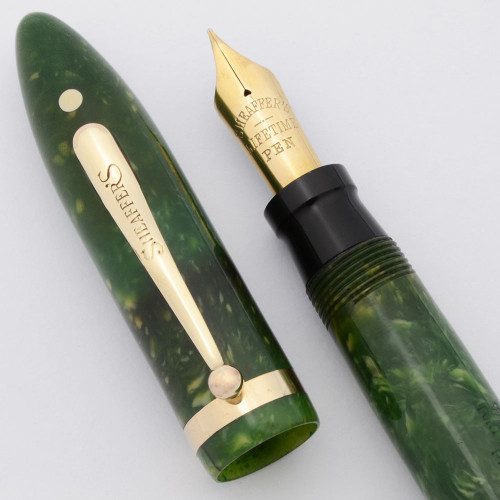 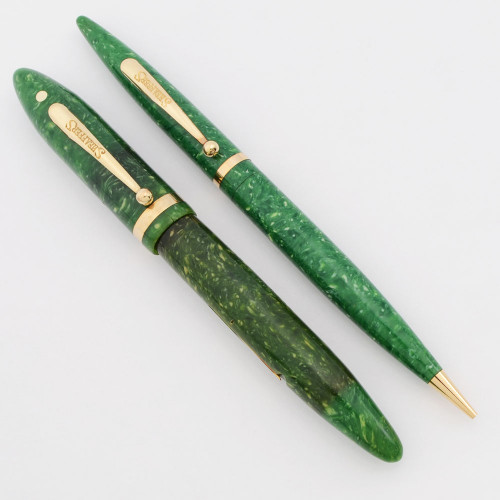 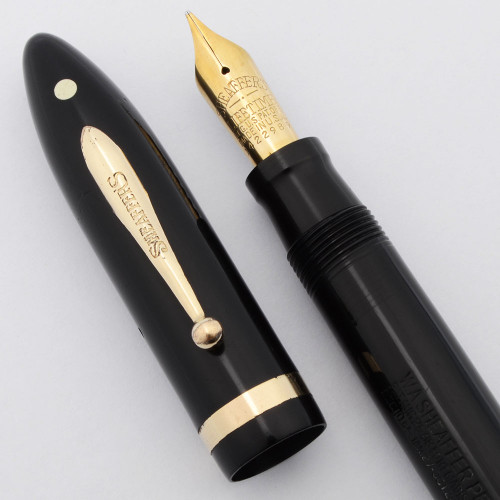 $260.00
Type  Beautiful oversize fountain pen ... this version has what they call the "short quill" detachable end. Sometimes people think this has to do with phone dialing, but there's no evidence to...
Add to Cart 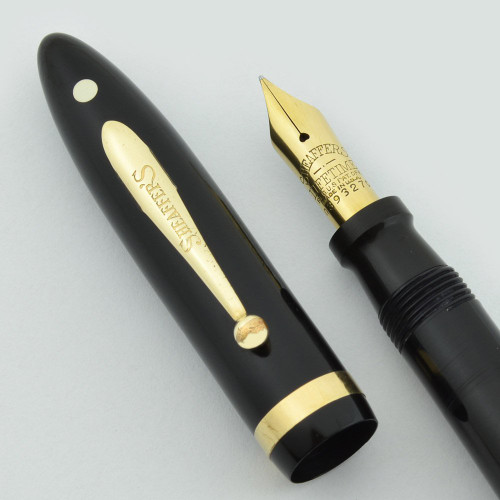 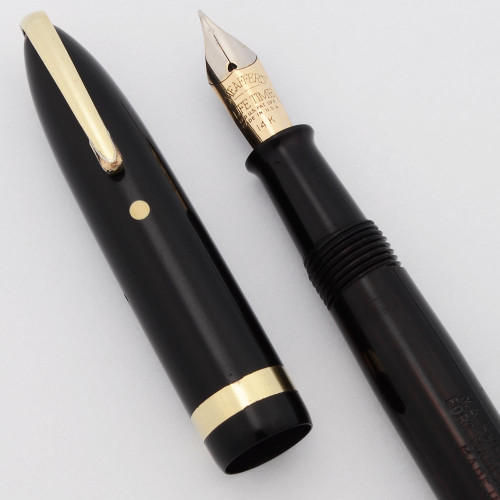 $130.00
Type  Fountain Pen Product Name  Balance Lifetime model with a white dot (military clip version). Manufacturer and Year  Sheaffer, made in USA -- 1940-2 (those were the years...
Add to Cart 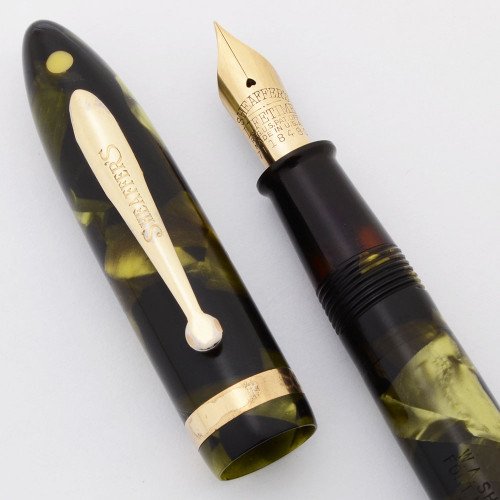 $130.00
Type  Lever filling fountain pen, restored and working well. Product Name  This is from the Balance Lifetime line. Very small, but not the super small "petite" size. Manufacturer and...
Add to Cart 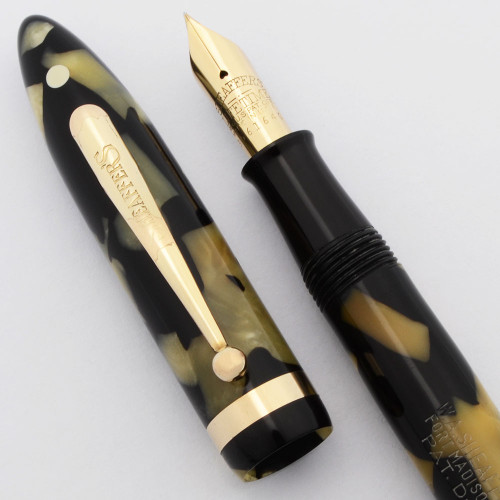 $200.00
Type  Beautiful oversize fountain pen ... this version has what they call the "short quill" detachable end. Sometimes people think this has to do with phone dialing, but there's no evidence to...
Add to Cart
×
×